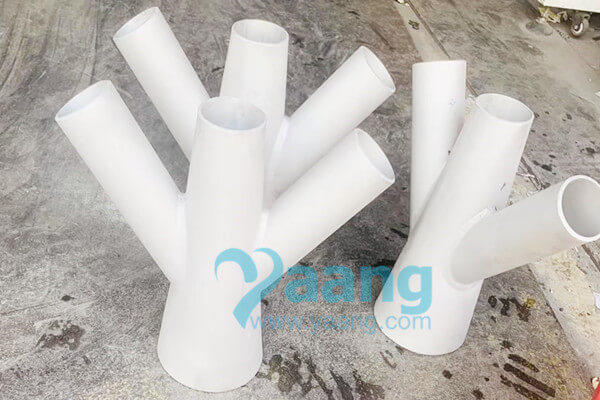 A double wye creates a double S trap. A double fixture fitting is made so that air in the trap arm meets the stack before the drain drops down so that a siphon cannot be created. If the trap siphons it breaks the trap seal and there is nothing between your nose and whatever gas is in the sewer. An exhaust fan in the bathroom makes the situation worse.

What is the difference between lateral tee and True WYE?

A straight run with a branch to one side is a LATERAL.  A fitting with a trunk coming up that splits to a 45º branch left and right is called a TRUE WYE, because it resembles a “capital letter Y”.

Comparing the two lateral pipe fittings, when the inflow pipe direction is horizontal to the ground,we can choose the lateral tee for better support from ground,and when the inflow pipe direction is vertical, then we’d better use the WYE fitting, it will bring a symmetrical interaction force to the piping system. Such designing will make sure the pipe in a stable support when running.