Thread connection is the most basic and standard mechanical part in automobile manufacturing technology, and it is also the most widely used connection technology in automobile industry. It has the advantages of simple structure, reliable connection, high precision, convenient assembly, convenient disassembly and reuse in the whole vehicle assembly process. The parts are connected by bolts, that is, the two connected bodies are closely connected by the torque applied by “tightening” and have enough axial preload (that is, axial tensile stress) to ensure the reliable connection and normal work of the connected parts. During assembly, the clamping force must be large enough to ensure that the connected parts do not move relative to each other in the working process; In addition, the applied clamping force must ensure that the bolt and connected parts will not be damaged or plastic deformation in the process of assembly and service.
At present, in the process of automobile assembly production, the torque can be used as an intermediate quantity to evaluate the assembly quality of bolt connection. For example, the torque control method obtains the axial preload required by the bolt by controlling the final torque of the bolt, and stops tightening immediately when the tightening torque reaches the set target torque, thus ending the torque control. In the engine assembly process, bolt connection has become the most commonly used fastening and connection method, and tightening process is an important part. Through the optimization design of tightening process monitoring strategy, effective systematic prevention is carried out to reduce the quality risk of tightening process, so as to improve the assembly efficiency.
The failure cases of automobile bolts occur frequently, and the failure causes are various, such as multi-source fatigue fracture due to bolt looseness in use; Hydrogen induced delayed fracture is caused by microcracks during machining; Surface carburization leads to delayed cracking; The quenching crack propagates and breaks during assembly. A batch of hexagon socket bolts with cylindrical head used to fix the engine nozzle produced by a supplier cracked many times during assembly. In this paper, the basic principle of metal materials science is used to study and analyze the root cause of bolt fracture, so as to prevent the failure problem from happening again.

The fuel injection nozzle of a certain type of automobile engine is assembled and fixed with 46s20 steel round head hexagon bolts. When the assembler works with the correct torque, the through type longitudinal cracks of a batch of bolts occur for many times, and the cylindrical head and thread section of the bolts are fractured from the outside to the inside to the central hole, as shown in Figure 1. After the investigation, the electronic program monitoring results showed that the torque used met the requirements. According to the traceability documents, all the broken bolts came from the same batch produced by a supplier.

The chemical composition was analyzed by spectro Maxx direct reading spectrometer; A bolt was cut from the central hole, and the fracture surface was opened naturally. The fracture morphology was observed by KEYENCE vhx-1000 ultra depth of field three-dimensional optical microscope; The metallographic specimen of cross section was cut at the other bolt cylinder head, and then polished and corroded by 4% nitric acid alcohol. The metallographic specimen was observed and analyzed by Zeiss Axio imager M2M microscope.

The broken nozzle bolt was sampled and analyzed by direct reading spectrometer. The results are shown in Table 1, which shows that the chemical composition of the bolt meets the requirements of free cutting steel 46s20 (EN 10277-3:2008). 46s20 is a kind of sulfur free cutting steel, which is suitable for manufacturing various parts with low mechanical properties, such as bolts, nuts, etc.

Cut it from the center hole of the randomly selected broken bolt, and the fracture surface will open naturally, as shown in Figure 2. The fracture surface of the cylinder head in a large depth (shown by the blue double arrow) is relatively flat, and the surface presents the pattern of alternating light and dark. After the blue box is enlarged, it is found that it has the sign of high temperature oxidation (see Figure 3); The fresh fracture surface is shown in the Yellow double arrow area in Fig. 2. This section belongs to the crack generated in the assembly process, which linearly originates from the end of the high-temperature oxidation area and extends to the direction of the central hole. There is no plastic deformation on the fracture surface. The metallographic specimen of cross section was made along the cylinder head of another randomly selected broken bolt. The metallographic observation showed that from the outer edge inward to about 1 / 2 of the wall thickness, the crack trend was relatively smooth, and then turned to zigzag (see Fig. 4). At low magnification, both sides of the crack in the smooth section are white. At high magnification, there is obvious high temperature decarburization near the fracture in the smooth section, and the depth of decarburization layer can reach 0.15mm, as shown in Figure 5; The normal region is composed of pearlite and ferrite with fine grains, as shown in Fig. 6. 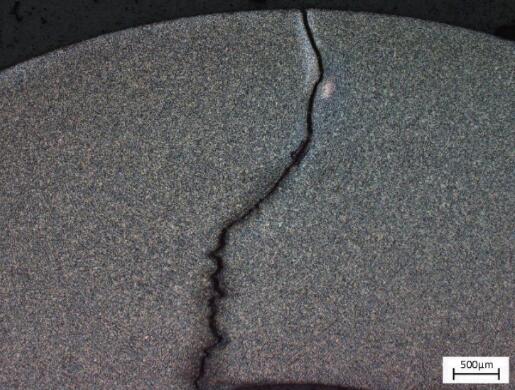 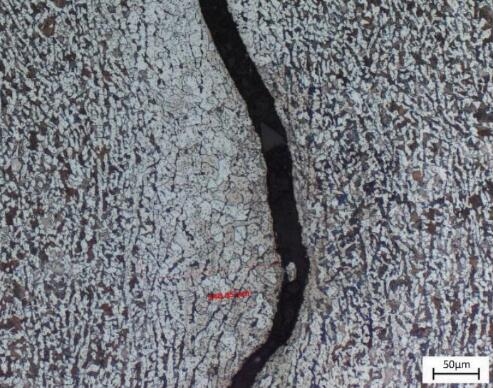 Combined with the observation results of metallographic structure and stereological morphology, it can be judged that the cracks in the smooth section of the outer circumference are not real cracks, but conform to the high temperature folding characteristics produced in the hot forging process, accompanied by a certain depth of oxidation and decarburization. The same batch of unused new bolts were randomly inspected, and folding defects were also found on the cylindrical head of the bolts, as shown in Figure 7. After erosion, it is found that the microstructure near the fold has the characteristics of processing flow line roughly parallel to the fold, has obvious characteristics of decarbonization at high temperature, and there is a large oxide slag inclusion, as shown in Figure 8. Figure 8 folding defect of new bolt cross section sample (erosion state)
Through the above analysis, it can be concluded that the fracture of the bolt in the correct assembly process is related to the folding defect on the outer surface of the bolt cylinder head. The folding depth is larger, even more than 1 / 2 of the wall thickness, which significantly reduces the effective cross-sectional area of the bolt, and easily causes stress concentration. Under the torsion action of the assembled torque wrench, a strong tensile stress is formed at the front end of the fold, a linear crack source is initiated, and the crack propagates rapidly to the center hole, resulting in low stress brittle fracture.

In this paper, the fracture observation, spectrum analysis, metallographic examination and other tests are carried out on the bolt oil pipe of automobile fuel injector with assembly fracture, and the causes of bolt fracture are explored. The main conclusions are as follows.