Carbon steel is the main material used in the secondary pipeline of nuclear power plant. In recent years, more and more attention has been paid to the problem of carbon steel pipe thinning due to the safety accidents caused by the secondary pipeline rupture in nuclear power plants. In this paper, a nuclear power plant overhaul found that the wall thickness thinning exceeded the standard and replaced the pipeline parts as the research object, through the composition analysis, metallographic analysis, micro morphology analysis and oxide film analysis, combined with the pipeline operating conditions and environmental analysis, the final clear wall thickness thinning modes of these pipelines are erosion corrosion, flow accelerated corrosion and cavitation erosion, and put forward targeted improvement measures and suggestions.

Carbon steel is the main material used in the secondary circuit of nuclear power plant. In recent years, many nuclear power plants have seen the phenomenon of wall thickness thinning of carbon steel pipes, which has caused many safety accidents. During the overhaul of a nuclear power plant, it was found that some small-sized elbows, elbows and orifice plates in the secondary circuit had cracks or wall thickness thinning phenomenon. In view of this situation, some typical pipe sections are selected for analysis in the replaced pipe with wall thickness reduction, and corresponding measures and suggestions are given according to the analysis results. Due to the large number of pipe samples, this paper only gives the analysis process of two representative elbow and one throttle orifice.

Three samples were selected for analysis:

The influence of flow velocity on wall thickness reduction is studied by comparing No.1 and No.2 elbows, and No.1 and No.3 orifice plates are compared to study the influence of fluid state on wall thickness reduction.
The No.1 elbow (Φ 32mm × 3mm) is located in front of the high-pressure steam trap and behind the control valve in the high-pressure drainage pipeline system of the main steam system of unit 2 of the nuclear power plant. The pressure of the main steam system (about 6Mpa) is much higher than that of the steam trap (about 0.06mpa), so the flow rate in the high-pressure pipeline drainage system is relatively high. The No.2 elbow (Φ 28mm × 3mm) is located between the low-pressure heater and the high-pressure heater of the water supply system. After the deaerator, it belongs to the bypass pipe of the check valve at the outlet of the feed water pump, and the downstream of the elbow is a bypass valve. The No.3 throttle orifice is located behind the control valve and in front of the steam trap on the high pressure pipeline drainage line of unit 1, which is similar to the position of elbow 1. The length of the weld between the front and back of the orifice plate is 75mm, the diameter of the hole is 10mm, the length of the hole is 22mm, the two sides are 12 trapezoid, the working temperature is 150 ℃ and the pressure is 0.06mpa
The above pipeline samples are made of 20G high-quality carbon steel. The pipe samples were sawed along the axial and circumferential direction and the wall thickness was measured. It was found that the No.1 elbow was seriously thinned (about 1.5mm), and the inner wall was black and bright with sharp scouring marks; the wall thickness of No.2 elbow was slightly thinned (about 0.3mm), and the inner wall was dark red; the corrosion perforation occurred on the No.3 throttle orifice plate at a distance of 10 mm from the weld, and the wall thickness near the hole was obviously reduced and the surface was rough, showing dense honeycomb corrosion Pit.

The above-mentioned pipe samples were inlaid, ground and polished, etched with 2% nitric acid alcohol, and the metallographic structure was observed under the metallographic microscope. The results show that the microstructure of the sample is normal, which is composed of ferrite grains (grain size of 20μm-30μm) and pearlite with network distribution. There are few inclusions and no decarburization on the surface.
Scanning electron microscopy (SEM) was used to observe the morphologic characteristics of the matrix at the wall thinning position. A layer of black or dark red oxide film was attached on the surface of the pipeline, and Clarke solution (100g concentrated HCI + 2gSb2O3 + 5gSnCl) was used to remove the film for observing the substrate.
The inner wall of elbow of No.1 elbow has wavy morphology at low magnification, and obvious dimple on the surface at high magnification, and there is material loss locally, which indicates that the inner wall of the pipe has plastic deformation under external force, and there is material spalling phenomenon. At low magnification, pits with fish scale distribution on the surface of No. 2 elbow are observed, with the size of about 200 μ m to 300 μ M. under high magnification, ferrite grains and grain planes with different orientations can be seen, without obvious mechanical deformation characteristics. There are a lot of fine dimples on the surface of No.3 throttle orifice plate, with the sizes ranging from several microns to more than ten microns, which is obviously smaller than the grain size of carbon steel, which indicates that the micro parts of the material surface are affected by external forces respectively. 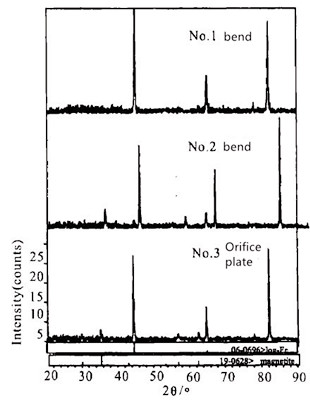 As a strengthening element, C element can improve the strength and hardness of carbon steel, so as to improve the ability of wear resistance and erosion corrosion resistance. The content of C element in No.1 elbow is low, which makes its hardness, wear resistance and erosion corrosion resistance decrease. Elbow No.1 is located in the high-pressure drainage pipeline, and the internal flow rate is high. Under the action of high-speed fluid, the surface material in contact with the fluid is constantly eroded away, resulting in the thinning of the pipeline. Because of the continuous loss of surface materials, the oxide film is not easy to retain, so it can not protect the matrix. If the content of S element is too high, the impact toughness and high temperature property of carbon steel will be decreased, and micro cracks will easily form on the pipe surface. Under the action of fluid, the microcracks will expand and accelerate the corrosion and spalling of the surface metal. The macro, micro morphology and oxide film analysis show that the No.1 elbow is subjected to the mechanical force of fluid.
Through the above analysis, it is considered that the high-speed fluid in the No. 1 elbow causes the pipeline to be scoured and the wall thickness is reduced, which belongs to erosion corrosion. To solve this problem, the following measures can be taken: increase the Cr content in the pipe material (improve its corrosion resistance); increase the pipe diameter, or install a certain shunt system at an appropriate position to share the flow; change the pipe layout, reduce the use of elbow or increase the curvature radius of the elbow.

The results show that the oxide film on the surface of No.2 elbow is the thickest among the three samples, and there is no visible deformation feature and material loss caused by mechanical action on the substrate surface, which indicates that the oxide film separates the direct action of fluid on the matrix. From the analysis of working conditions, the No.2 elbow is located in the bypass of water supply system, and the internal flow velocity is slow, which is not enough to scour the pipeline materials. However, the flowing medium accelerates the dissolution of the oxide film and the diffusion of oxygen through the oxide film to the substrate, which leads to the continuous growth of the oxide film while dissolving, and finally makes the pipe wall thinner, which is in line with the process of flow accelerated corrosion. In addition, the macro morphology of No. 2 elbow is orange peel and the micro morphology is fish scale, which is also a typical flow accelerated corrosion morphology. Although the content of S element in No.2 bend is also high, its direct effect on wall thickness reduction is not observed.
According to the above analysis, the wall thickness thinning of No. 2 elbow is characterized by accelerated dissolution and growth of oxide film, which belongs to flow accelerated corrosion. According to the current understanding of flow accelerated corrosion, it is the most effective way to replace carbon steel and use low alloy steel with Cr content higher than 1%. For the carbon steel pipeline in use, the monitoring of pipe wall thickness should be strengthened.
No.1 and No.2 elbows belong to the same type of elbow, but the internal velocity difference is very big. Therefore, the mechanism of wall thickness thinning is completely different, and the treatment methods are also different.