Screws are small in size and easy to be ignored in electrical products. In addition to specifications, appearance color and corrosion resistance are mainly considered in selection. Nowadays, the screws used in small household appliances have higher requirements on corrosion resistance than the original AV products due to different use environments.
Through the recent visit to some electroplating factories, the screw samples of different processes, different coating or coating thickness and different specifications were collected, and the neutral salt spray experiments were carried out. It is hoped that the selection of screws used in the production of small household appliances can be referred.
The common surface treatment processes of screws include oxidation, electrophoresis, electroplating and Dacromet. The following is a summary based on the color of screw surface treatment.

It can be divided into room temperature blackening and high temperature blackening. Taking room temperature blackening as an example, the process flow is: chemical degreasing hot water washing cold water washing rust removal acid etching cleaning blackening cleaning cleaning over oil or over sealing. It is an oxide film formed by sodium hydroxide and sodium nitrite at a high temperature of more than 100 ℃.
The main component of the oxide film is Fe3O4, and the uniformity of the film is only 0.6 ~ 1.5 μ m. The corrosion resistance is relatively poor, in the case of no oil or closed neutral salt spray only about 1 ~ 2 hours, after oil in about 3 ~ 4 hours. Small appliances do not use this process of screw. In terms of appearance color, oxide black is similar to black zinc and electrophoretic black, but not as bright as black zinc and electrophoretic black.
No.2 Electroplating
There are two kinds of black electroplating, black zinc and black nickel. The process principle is basically the same, but the formula of electroplating solution and the passivation solution for post-treatment are different. The chemical property of zinc is active, it is easy to oxidize and darken in the atmosphere, and finally produce “white rust” corrosion. After zinc plating, chromate treatment is used to cover a layer of chemical conversion film on zinc, so that the active metal is in a passive state, which is the passivation treatment of zinc layer. The passivation film can be divided into white passivation (white zinc), light blue passivation (blue zinc), black passivation (black zinc), military green passivation (green zinc), etc.
01. Black zinc plating 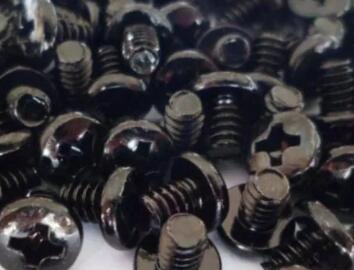 The electroplating process is as follows: degreasing – Cleaning – weak acid etching – galvanizing – Cleaning – passivation – Cleaning – drying – passing through rack; The final rack is mainly made of black oil (a kind of paint), Tianna water and rubber water according to a certain proportion. Its main function is to improve the black uniformity and brightness of the screw surface, as well as the anti-corrosion ability of the screw. After passing the rack, the anti neutral salt spray ability is more than 20, and the anti-corrosion ability can also be improved if the oil can be passed.
The neutral salt spray test of black zinc screw lasted for 12 hours, and the industry level was relatively high. From the appearance, it is darker than black nickel and close to oxide black and electrophoretic black. The distinguishing method is to grind several times on white paper to reveal the bluish white of zinc.
02. Black nickel plating 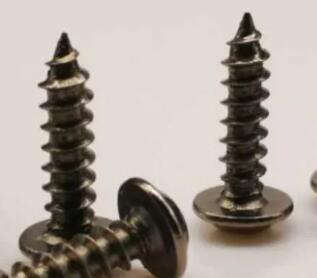 The electroplating process is as follows: degreasing cleaning weak acid activation cleaning copper plating bottom activation cleaning black nickel plating cleaning passivation cleaning drying passing through rack. The black nickel layer obtained from black nickel plating bath contains about 40% ~ 60% nickel, 20% ~ 30% zinc, 10% ~ 15% sulfur and 10% organic matter.
In the process of electroplating, the sulfur in thiocyanate ion transforms into sulfur ion, and forms black nickel sulfide with nickel. The main function of copper plating in the process is to make nickel plating easier and improve the corrosion resistance of screws. Generally, the thickness of copper base is 1 μ. If the thickness of copper bottom is increased, the corrosion resistance can be improved, but the composition will increase accordingly.
Through the thorough experiments on the screws used by various electroplating manufacturers, the results show that the industry level of neutral salt spray resistance is generally within 6 ~ 12 hours. If the ratio accuracy of additives used in various electroplating and the quality of raw materials are improved, it can be improved. In order to improve the corrosion resistance of nickel plating process, the general electroplating manufacturers will over oil or seal the screws. Considering the corrosion effect on plastic parts, over oil cannot be used to improve the salt spray time. The neutral salt spray test time is 8 hours, which is unstable in the routine test, and several batches of routine neutral salt spray are unqualified.
It is easy to distinguish black nickel from other black zinc, oxide black and electrophoresis black in appearance.
No.3 Electrophoretic black 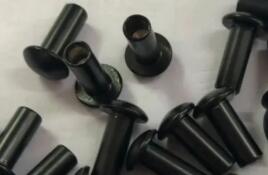 The colloidal particles of organic resin are deposited on the parts by electrochemical method to form organic coatings of various colors. Electrophoretic black is widely used in the industry. Taking the black process as an example, the electroplating process is as follows: degreasing cleaning phosphating electrophoretic paint drying. It can be divided into anode electrophoresis (negative ion formed after resin ionization) and cathode electrophoresis (positive ion formed after resin electrophoresis). Compared with the paint process, it has good construction performance, less pollution and harm to the environment, and its neutral salt spray resistance is 300 hours or more. Its cost and corrosion resistance are similar to those of Dacromet process. 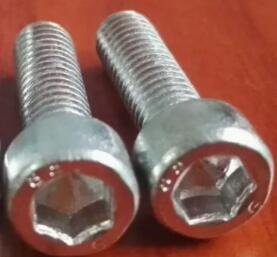 The electroplating process is as follows: degreasing – Cleaning – weak acid activation – electro galvanizing – Cleaning – white passivation – hair cleaning – drying. Unlike black zinc, white passivation is a colorless and transparent zinc oxide film, which almost does not contain chromium. Therefore, its corrosion resistance is inferior to black zinc, blue zinc and color zinc. The industry standard is 6-12 hours, Some electroplating factories can resist neutral salt spray for about 20 hours by improving the proportion accuracy of passivation solution.
Because of the neutral salt spray test of the screw with white zinc plating surface treatment process, the initial appearance of white corrosion and red rust is about 40 hours, so the corrosion resistance of white zinc is better than that of white nickel. Compared with white nickel, white zinc is the primary color of zinc, which is bluish white. 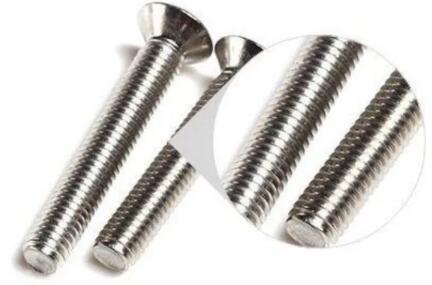 The electroplating process is as follows: degreasing – Cleaning – weak acid activation – Cleaning – copper plating bottom – activation – Cleaning – nickel plating – Cleaning – passivation – Cleaning – drying – or sealing, which is basically the same as black nickel process, mainly due to the different formula of electroplating solution, less zinc sulfide and additives.
Nickel is a silvery white and yellowish metal, so to get a better appearance, a brightener for nickel plating will be added. Its corrosion resistance is not different from that of black nickel, which lasts for 6-12 hours. Generally, the process of manufacturers will be oiled or sealed. If considering the impact on the corrosion of plastic parts, it should be the key to control whether it is oiled in the incoming materials. 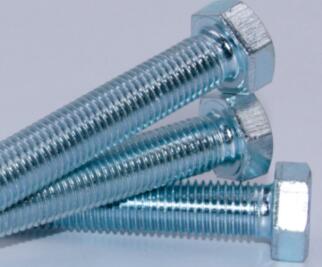 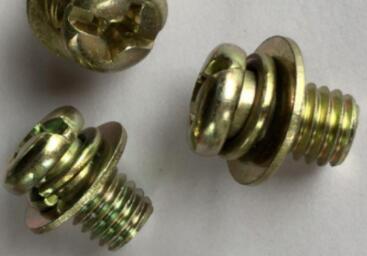 The process is similar to that of white zinc, blue zinc is passivated zinc oxide film containing 0.5 ~ 0.6mg/dm2 trivalent chromium. Green passivation, also known as pentaacid passivation, can obtain thick grass green film. The passivation solution contains phosphate ions. The obtained Youguang grass green film is a complex protective film composed of chromate and phosphate.
For its corrosion resistance, blue zinc is better than white zinc, and green zinc is better than blue zinc. The color of blue zinc is slightly blue, which is relatively close to that of white zinc and is widely used in the industry. It is recommended as an alternative process screw in product design. 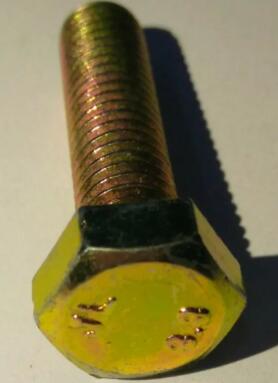 The passivation process of color zinc is: galvanizing – Cleaning – 2% ~ 3% nitric acid – Cleaning – Low Chromium Color Passivation – Cleaning – baking aging. The passivation temperature is too low, the film formation is slow, the color is light, and the film is thin; High temperature, thick and loose film, adhesion is not strong. It is best to control at about 25 ℃ to ensure the same color in a certain period of time.
After passivation, the film must be baked to improve the adhesion and corrosion resistance. The color zinc plated screw can resist neutral salt spray for more than 48 hours and control well for more than 100 hours. 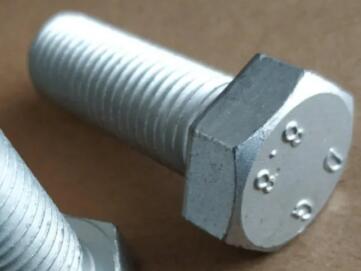 Dacromet is the abbreviation and transliteration of Dacromet, which is also called zinc aluminum coating. The basic process is: degreasing – degreasing – Coating – preheating – sintering – cooling. Generally, there will be 2-4 times from coating to cooling, because the screw dip coating needs to be done several times to reach a certain thickness.
A layer of Dacromet solution is coated on the metal surface, which contains flake like zinc and aluminum (the general scale size is 0.1 ~ 0.2 * 10-15) μ m] The hexavalent chromium in Dacromet solution was reduced to trivalent chromium after baking at about 300 ° C for a certain period of time, and the amorphous complex chromate compound (ncro3mcr2o3) was formed.
Corrosion resistance is very good, neutral salt up to 300 hours, the disadvantage is uneven coating, thin position 5 ~ 10 μ m. The thickness is 40 μ Therefore, it is better not to use Dacromet process as surface treatment for machine tapping screws and screws with smaller diameter.