Figure 2 The effect of niobium on steel thermoplasticity 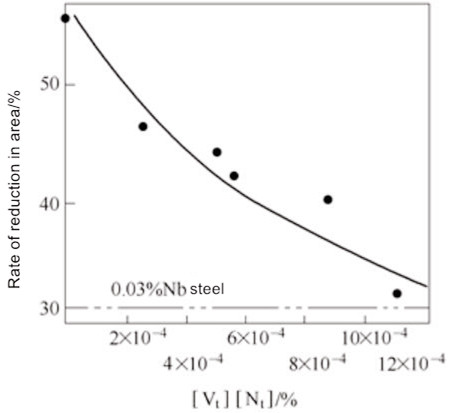 A large number of research and test results show that in the continuous casting process, according to the width and temperature range of the high temperature plastic trough zone of various steels, the cooling rate of the secondary cooling zone is strictly controlled, and the smooth weak cooling is adopted to make the casting slab during bending and straightening. The surface temperature is higher than the precipitation temperature of carbonitrides, or higher than the γ→α phase transition temperature, or higher than the upper critical temperature for embrittlement, avoiding the plastic trough zone, regardless of vanadium steel, VN steel with high nitrogen and vanadium content, Niobium steel can prevent transverse cracks in the cast slab. In addition, from the use of a reasonable mold and high frequency, small amplitude, and good performance mold powder, maintain the stability of the mold liquid level, reduce the sulfur and phosphorus in the steel, inhibit the precipitation of carbonitrides, and make the Measures such as refining the austenite grains in the surface layer of the cast slab and reducing the crack sensitivity are also helpful to prevent the occurrence of transverse cracks in the cast slab.