Although the small bolt is not impressive, but it is used as a series of automotive key parts of the fastener, once the corrosion fracture failure, light car failure, heavy casualties. 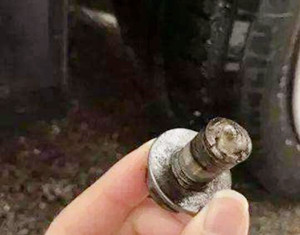 This year, there have been many accidents at Tesla, and one after another global recalls. According to the website of China’s State Administration of market supervision and administration, Tesla motor (Beijing) Co., Ltd. filed a recall plan with the State Administration of market supervision and administration. It is decided to recall 3183 imported model X Series vehicles produced from April 15, 2016 to October 16, 2016 from June 7, 2020.
When some vehicles within the scope of this recall are exposed to high corrosive environment such as strong deicing salt for a long time, the bolts that fix the steering gear motor on the steering gear housing may be corroded and broken, resulting in the displacement of the steering gear motor and the slip of the drive belt, resulting in the weakening or loss of steering power, which may increase the risk of vehicle collision, and there are potential safety hazards. This article will take Tesla recall as an example to analyze the causes of bolt fracture failure, bolt selection and assembly should pay attention to.
Tesla will replace new steering gear steel bolts for vehicles within the scope of recall, and add anti-corrosion coating on the steering gear motor housing and motor fixing bolts; if the fixing bolts are found damaged or damaged during disassembly, the steering gear will be replaced free of charge.
This is not the first time Tesla has recalled its products due to steering power problems.
In early 2018, Tesla announced that it would recall 123000 models cars worldwide due to power steering system failure. The recall covers all models cars that were manufactured before April 2016. The reason for the recall is that corrosion of certain bolts in cold weather may cause power steering wheel failure. In the cold environment, the road salt splashed on the road for snow melting may accelerate the corrosion rate of the problem parts.
It is not difficult to find that in 2018, when Tesla recalled the vehicles for the first time due to specific bolts, it delineated the scope of all models cars that were manufactured before April 2016, but in fact, some model X Series cars produced from April 15 to October 16, 2016 also had the same problem, and these vehicles continued to drive for two years with potential safety hazards, It is only today that the problem has been discovered and made public.
We still don’t know whether the second recall of the same problem is caused by Tesla’s intention to conceal other vehicle problems at the time of its first recall, or whether the enterprise is not conducive to the investigation of the same potential problems of other products.

Fortunately, there is no report of serious consequences due to the above problems. However, as an electric vehicle manufacturer with modern advanced technology, Tesla “fell” twice on a small bolt, which inevitably makes the outside world question Tesla’s ability in quality control and product potential risk prevention and control.

Analysis of possible causes of recall

It can be seen from the recall instructions that the connecting bolts are made of aluminum alloy, and the housings of the motors and gearboxes are also made of aluminum alloy. Under normal circumstances, bolts of this material will not easily cause corrosion. However, it is mentioned in the recall statement that the bolts were broken due to corrosion caused by deicing agents.
According to the Tesla engineer of Model S, the frequent use of calcium or magnesium salt instead of sodium chloride (table salt) in the snow melting agent will cause greater corrosion.
Snow melting agents are mainly divided into two categories:

According to the paper “New Method for Determination of Corrosion of Chloride-type Snow Melting Agent Carbon Steel” written by Wang Shuxuan and others, when the solution concentration is less than 4%, the weight loss rate of corrosives is CaCl2>MgCl2>NaCl, so when the concentration is less than 4 %, calcium salt and magnesium salt snow melting agent will cause greater corrosion.
After the bolt is connected and assembled, there is basically no exposed part, and in principle, it will not cause corrosion of the bolt itself. The possible reason is that the deicing agent will penetrate into the threaded hole, causing corrosion of the thread and threaded hole, especially after the threaded hole is corroded, if the design engagement length of the threaded hole is relatively short, it may cause the sliding tooth of the threaded hole. Or even if the tooth is not slippery, the pre-tightening force will decrease, which will cause the fatigue fracture of the bolt under the action of long-term fatigue load.
From the description of the recall measures, sealants are used to protect the bolt head, motor and gearbox housing and their contact surfaces, which will reduce corrosion, especially the bolt head and gearbox housing, gearbox housing and motor housing Corrosion between bodies.
It can also be seen from these measures that there is no problem in the design or quality of the bolt itself, mainly due to the corrosion of the connected parts, especially the corrosion between the contact surfaces, plus the wall thickness of the gearbox housing flange It is relatively thin, resulting in greater rigidity of the connected part. If a certain amount of corrosion occurs on the contact surface, a slight change in the clamping length of the connected part will also cause a decrease in the pre-tightening force, which will result in a fatigue load. There will be problems with openings on the joint surface, which will result in greater fatigue stress, and fatigue fracture will occur if the bolts can be broken.
In addition, steel grade 8.8 bolts are usually used here, and aluminum alloy bolts are used in Tesla’s instructions. If they are consistent with the usual 8.8 grade bolt specifications, it may cause insufficient clamping force;
If a larger first-class specification is used with the 8.8 bolt specification, such as the M8 specification, and other parts use shared parts, if other vehicle parts are borrowed, the wall thickness of the aluminum alloy connected parts will become thinner, which will Cause a series of problems such as insufficient strength.

The main reason for the recall of the steering gear motor mounting bolts here is: due to the effect of the deicing agent, the connected parts, especially the corrosion effect between the joint surfaces, cause a slight reduction in the clamping length of the connected parts, thereby reducing the bolts The pre-tightening force will eventually cause the fatigue fracture of the bolt under the action of the fatigue load.
Usually, the bolts here are made of 8.8 grade steel bolts. Tesla uses aluminum alloy bolts, which may cause low bolt strength and insufficient pre-tightening force. Under the action of external load, it will cause openings in the connected parts, resulting in Larger fatigue stress may cause fatigue fracture of bolts.
There is another possible reason: the existing mature parts are borrowed from the connecting parts, the larger aluminum alloy bolts cause insufficient engagement length, or the threaded holes are enlarged and the wall thickness becomes thinner, resulting in insufficient strength.

The failure of general fasteners includes the following:

The cause of the failure comes from one or a combination of the following three aspects:

Here are a few examples of fastener failures that everyone sees daily: Figure.1
3) During the forming process of the fastener head, it is very important that the metal grain flow lines in the correct direction. The crystal grain streamline that moves sharply to the fillet at the junction of the bolt head and the rod cannot produce good flow (see Figure 2). This may make the fastener head easily broken during installation.

Fig.2 During the head forming process, it is very important that the metal grain flow lines shape in the correct direction. The image on the left represents an acceptable particle flow that meets SAE USCAR8 specifications.
Everyone needs to inspect the fasteners during the manufacturing process to determine the appropriate grain flow pattern. The inspector uses hydrochloric acid and water to boil the head of the sample fastener for 1 minute, so that the grain size can be easily evaluated. flow. For example, all head bolts and screws used by our automotive customers must meet the grain flow pattern of the SAE USAC8 specification.
4) When the torque is too large, if the threads close to the head are too close, the pressure on the head will increase. This situation may also lead to failure from head to shaft. Because this defect will increase the radial stress, it will accelerate hydrogen embrittlement when it appears in the fastener (see Figure 3).

Fig.3 Hydrogen embrittlement is a common cause of fastener failure. The arrow in the photo indicates the load stress area.
When hydrogen is absorbed in the steel during the electroplating process of fasteners and moves along the grain boundaries to stress concentration, internal hydrogen embrittlement will occur. This may cause sudden catastrophic failure under load.
5) Most threaded fasteners are treated with electroplating or protective coating to prevent rust or corrosion, and then test their corrosion resistance according to ASTM B117 (salt spray test). This process may cause damage to the protective coating.
6) In the final test and assembly process, each fastener will suffer some more or less damage, resulting in the protective coating may be damaged. Premature red (iron oxide) rust may appear during use.
7) Another common problem is dip spin coating. It provides excellent corrosion protection, but when too much electroplating fills the head of the small screw, it may cause unsmooth drilling.
The geometry, material, heat treatment, surface treatment and other factors of the fastener will affect its performance during the service life of the product from assembly to installation. Therefore, fasteners should always be regarded as engineering parts rather than simple standard parts.

Recommendations for the selection of fasteners

High-quality fastening requires a perfect match between the fastener and the connected material and the fastener (if it is a bolt) and the nut. For example, using grade 8 bolts with grade 5 nuts will produce a clamping force lower than expected.
Due to the miniaturization of products, the correct selection of fasteners is more important than ever. Fastener handling not only requires the same load, but also uses lighter and thinner materials in a smaller space.

Precautions for assembly of fasteners

The correct manufacturing and selection is an important first step to prevent fastener failure. During the tightening process, ensure that the specified requirements are met (in many cases, especially in field maintenance, it may happen that the specifications are not met or over tightened), and the integrity of the fastener thread is maintained.