Globe valve, also known as shutoff valve, belongs to forced sealing valve, so when the valve closes, pressure must be exerted on the disc to force the sealing surface not to leak. When the medium enters the valve from below the disc, the resistance to be overcome by the operating force is the friction between the stem and packing and the thrust generated by the pressure of the medium. The force to close the valve is greater than the force to open the valve, so the diameter of the valve stem is larger, otherwise the failure of the top bending of the valve stem will occur. There are three kinds of connection modes: flange connection, thread connection and welding connection. After the appearance of self-sealing valve, the medium flow direction of globe valve changes from above the disc to enter the valve chamber. Under the action of medium pressure, the force of closing the valve is small, while the force of opening the valve is large, and the diameter of the stem can be reduced accordingly. At the same time, under the action of medium, this form of valve is also more tight. Our country’s valve “three-way feed” once stipulated that the flow direction of globe valve should be from top to bottom. When the globe valve is opened, the opening height of the disc is 25%-30% of the nominal diameter. The flow rate has reached the maximum, indicating that the valve has reached the full open position. Therefore, the full open position of globe valve should be determined by the stroke of the disc.

The opening and closing parts of the globe valve are plug-shaped discs with flat or conical seals on the top of the seal. The disc moves in a straight line along the center line of the seat. The movement form of the valve stem (common name: concealed rod) can also be used to control the flow of air, water, steam, various corrosive media, mud, oil, liquid metal and radioactive media. Therefore, this type of cut-off globe valve is very suitable for cutting off or regulating and throttling. Because the stem opening or closing stroke of this kind of valve is relatively short, and has a very reliable cut-off function, and because the change of the seat opening is proportional to the disc travel, it is very suitable for flow regulation.

Globe valves can be arranged in a such a way that the disk closes against the flow or in the same direction of flow.

When the disk closes in the direction of flow, the kinetic energy of the fluid helps closing but obstructs opening. This characteristic is preferable when a quick-acting stop is required.

When the disk closes against the direction of flow, the kinetic energy of the fluid obstructs closing but helps to open the valve. This characteristic is preferable when quick-acting start is required.

Here in below image, you can see the globe valve parts such as Body, Bonnet, Stem, Seat, Disk, etc. 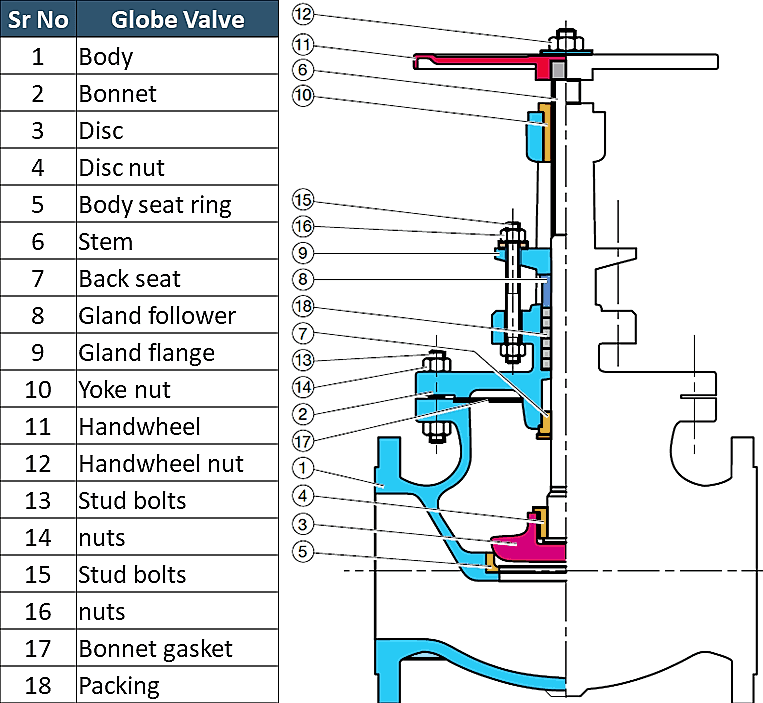 Globe valve is available in may different types of disc arrangement. Most used disk designs are listed below.

Ball disk design is used in low-pressure and low-temperature systems. It is capable of throttling flow, but in principle, it is used to stop and start the flow.

Depending on the type of body there are three types of globe valves;

The simplest design and most common type is a Z-body. The Z-shaped partition inside the globular body contains the seat. The horizontal seating arrangement of the seat allows the stem and disk to travel at a perpendicular to the pipe axis resulting in a very high-pressure loss.

This design simplifies manufacturing, installation, and repair. This type of valve is used where pressure drop is not a concern and throttling is required. The y-type design is a solution for the high-pressure drop problem in Z-type valves. In this type, seat and stem are angled at approximately 45° to the pipe axis. Y-body valves are used in high pressure and other critical services where pressure drop is concerned. Angle globe valve turns the flow direction by 90 degrees without using an elbow and one extra pipe weld. Disk open against the flow. This type of globe valve can be used in the fluctuating flow condition also, as they are capable of handling the slugging effect. Screwed bonnet: This is the simplest design available and it is used for inexpensive valves.

Bolted-bonnet: This is the most popular design and used in a large number of globe valves. This requires a gasket to seal the joint between the body and bonnet.

Welded-Bonnet: This is a popular design where disassembly is not required. They are lighter in weight than their bolted-bonnet counterparts.

Pressure-Seal Bonnet: This type is used extensively for high-pressure high-temperature applications. The higher the body cavity pressure, the greater the force on the gasket in a pressure -seal valve.

Globe Valves are used in the systems where flow control is required and leak tightness is also important.