How to deal with the internal leakage of valves in power plant?

The heat loss caused by the valve leakage of thermal system is an important factor affecting the thermal efficiency of boiler. The treatment of valve leakage is an effective way for coal-fired power plants to establish a long-term mechanism of safe production, improve the level of economic operation and establish a good social image. This paper describes the influence, cause and judgment method of valve internal leakage, and puts forward the measures to prevent valve internal leakage.

The heat loss caused by valve internal leakage of thermal system is an important factor leading to the increase of boiler heat loss. It is an effective way for coal-fired power plants to establish a long-term mechanism of safety production, improve the economic operation level of units and establish a good social image to formulate measures to prevent and control valve leakage, master operation and maintenance skills, and take the treatment of valve leakage as a key work.

Safety production is the core of coal-fired power plant production. Without safety production, the continuity and efficiency of unit operation will be lost. The internal leakage of the valve makes the equipment in operation unable to be isolated and eliminated, threatens the safe operation of the maintenance staff, and even causes serious consequences.

During the start-up of the unit, especially during the commissioning period, due to the long-term shutdown of the system, there is a lot of rust and salt accumulation in the pipeline, which requires the flushing of the drain valve of the fully open system during the start-up of the unit. If the flushing is not complete, there will be rust and other impurities between the valve core and the valve seat. These impurities jam at the bottom of the valve core, resulting in the valve not closed tightly, causing internal leakage.

When the unit is started or stopped, there is no proper time to open or close the valve. If the valve is closed too late or opened too early, high temperature and high pressure steam will cause serious erosion to the valve. The shut-off valve is in the state of half open and half closed, and the blow loss of the valve leads to the internal leakage of the valve. When the valve was closed, it was not confirmed that it was closed in place. For example, the drainage of the first, second and third sections of the steam extraction pipeline and the drain packing of the high-pressure water side were pressed tightly, so the operators would take more effort to close the valve. The operators did not strictly follow the operation requirements to judge whether the valve was closed in place according to the number of turns of the stem thread when the valve was closed. For the thermal pipeline with primary and secondary drain valves, there is no specified operation sequence to open and close the valve.

The traditional control mode of electric valve is through the mechanical control mode such as valve limit switch and over torque switch. Because these control elements are affected by the environment temperature, pressure and humidity, the valve positioning error, spring fatigue, uneven thermal expansion coefficient and other objective factors cause the internal leakage of electric valve. Pneumatic valve control components are generally equipped with open and close function of the cylinder, and the power of the cylinder is generally the instrument compressed air on site. The pressure and cleanliness of the instrument compressed air, the opening of the intake valve and the positioning of the close feedback will lead to the leakage of the pneumatic valve.

In the production process, the valve manufacturer did not strictly control the valve material, processing technology and assembly technology, resulting in unqualified grinding of the sealing surface and failure to eliminate the products with defects such as pockmarks and trachomas. However, the quality inspection of professional personnel before on-site installation was not strictly controlled, resulting in unqualified products entering the production site and causing internal leakage of the valve.
In addition, when the valve is not properly selected, it is easy to produce cavitation phenomenon, and the valve suffers from serious cavitation corrosion. The leakage of the valve seat can reach more than 30% of the rated flow.

It is determined by temperature

By changing the operation mode of the system

There are disturbed high-temperature steam before and after some valves, such as high-pressure bypass, feed water pump recirculation regulating valve, etc. even if these valves are tight without leakage, the stem temperature of these valves also exceeds 70 ℃. Therefore, the internal leakage judgment of these valves can change the operation mode of the system, such as comparing the temperature behind the high bypass valve with the exhaust temperature of the low pressure cylinder of the steam turbine, observing the temperature change behind the valve after isolating the desuperheating water of the high bypass valve to judge whether the high bypass valve is internal leakage, and observing whether the flow of the feed pump changes by closing the isolation valves before and after the feed pump recirculation regulating valve to judge whether the feed pump recirculation regulating valve is internal leakage It’s missing the net.

Establish an organization to prevent and control the internal leakage of the valve, appoint a responsible person, fulfill the two complete assessment, and strictly control the valve maintenance and acceptance. The prevention and control of valve leakage is by no means a matter of one or two professional workers, which should be taken as an important work for power enterprises to ensure the unit economy up to the standard; the professional staff of power generation department and equipment department should establish the account of valve leakage inspection and treatment; in the unit maintenance, after the valve maintenance, grinding or repair, the professional staff should press red lead powder to check the combination degree of the sealing surface, and implement step by step inspection According to the system of level acceptance, the unqualified maintenance quality should be reworked.

Some valves are normally closed during operation. They are usually closed when they are opened and started after shutdown. When the valve state changes, they are carried out under the system pressureless state. If impurities accumulate in the valve core, the valve core cannot be closed tightly. Therefore, when conditions permit, these valves should be opened and closed several times under pressure for flushing.

The best closing stroke of electric valve and pneumatic valve is 0. At present, the closing position of general valve is determined by torque. It must be carefully adjusted to ensure that the valve can be closed tightly to prevent scouring.

In order to prevent valve leakage caused by high-pressure steam scouring, two valves are added to the system requiring throttling adjustment. Cancel the repeated design or rarely used water drainage points to reduce the internal leakage points of system valves, such as the repeated design water and air drainage points of water supply system, the first and second ventilation valves of steam turbine, etc. The manual valve is added after the pneumatic valve of high and medium pressure steam drainage, and the manual valve is kept fully open during commissioning. 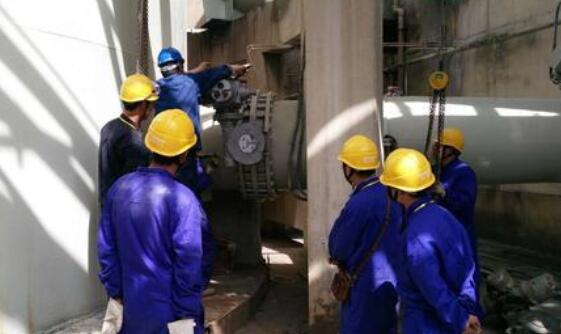