How to improve the heat transfer coefficient of heat exchanger?

Increasing the velocity can change the flow state and increase the turbulence fluctuation. For example, tube side and shell side split in shell and tube heat exchanger is one of the measures to increase flow rate, process length and disturbance. However, it should be noted that the increase of flow rate is limited by various factors. Therefore, various factors should be considered in the design or practical use to select the best flow rate or the flow rate allowed by the fluid conveying machinery. 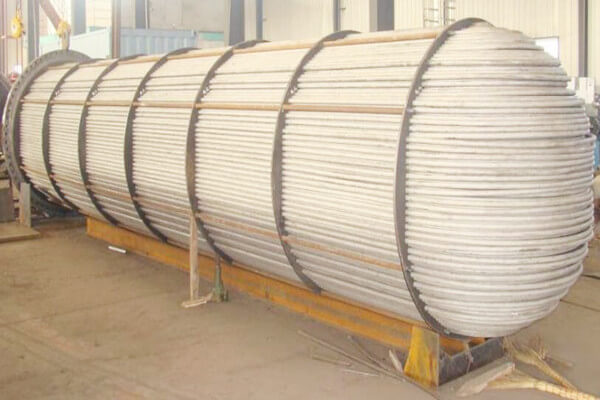 This is a method of cooling or heating the solid surface directly by spraying the fluid through a circular or slit shaped nozzle. Because the fluid directly impinges on the solid wall, the flow path is short and the boundary layer is thin, so the convective heat transfer coefficient increases significantly. When a liquid jet impinges on a heated surface, if the heat flux is high enough to produce boiling, it is called impingement heat transfer of two-phase jet. The experimental results show that not only the boiling heat transfer coefficient can be increased, but also the burnout point can be delayed, and the critical heat flow value can be significantly increased.

Many kinds of inserts, such as metal wire, metal spiral ring, disk-shaped component, twist iron and wing shaped object, are placed inside or outside the tube, which can enhance the disturbance and damage the flow boundary layer and increase the heat transfer. For example, the twisted twisted twist of thin metal strip is inserted into the tube to form a strong rotating flow and enhance heat transfer. If it can contact the tube wall closely, it can still act as a fin and expand the heat transfer surface. A large number of experimental studies have shown that the addition of inserts can significantly enhance the forced convection heat transfer, but also cause problems such as increased flow resistance, channel blockage and scaling. The insert should be used along the whole process of the pipeline to maintain the enhanced heat transfer in the whole process. In addition, when choosing the form of insert, the enhancement of heat transfer under small resistance should be considered.

The centrifugal force of rotating flow will make the fluid produce secondary circulation, which will strengthen the heat transfer. In addition to their own characteristics, some of the above-mentioned inserts, such as twist iron and metal spiral wire, can also produce rotational flow. In this paper, we would like to mention some special components or devices which can produce rotational flow. For example, vortex generator, it can make the fluid under a certain pressure in the tangent direction into the tube for violent rotary movement. The results show that the extent of heat transfer enhancement is related to reynolds number. At a certain heat source temperature, the convective heat transfer coefficient increases with re value, and reaches a certain maximum value and then decreases. In application, the actual re value should be controlled close to the critical re value when the convective heat transfer coefficient reaches the maximum, so as to make full use of the effect of rotating flow. In addition to fluid rotation, there are also cases of heat transfer surface rotation. When the pipeline rotates around different axes, the secondary circulation generated by centrifugal force, shear stress, gravity and buoyancy can promote heat transfer enhancement. The enhancement effect of pipe rotation on laminar heat release is significant, but not obvious in turbulent flow. The experimental results of subcooled boiling and large space boiling show that the boiling heat transfer coefficient or critical heat load can be increased for the pipe with spiral inclined surface and tangential groove vortex generator.

In general, there are three measures:

The physical properties of the fluid have a great influence on the convective heat transfer coefficient. Generally, the fluid with larger thermal conductivity and volume specific heat has larger heat transfer coefficient. For example, the volume of water cooling is much smaller than that of air cooling in cooling equipment, because the α value between air and wall is in the range of 1 ~ 60W/(M2·℃), while that between water and wall is in the range of 200 ~ 12000W/(M2·℃). Another way to change some properties of fluid is to add some additives into the fluid. This is a new topic of heat transfer enhancement by additives formed in the past 20 or 30 years. The additive can be a solid or a liquid, which is combined with the heat exchange fluid to form gas-solid, liquid-solid, vapor-liquid and liquid-liquid mixed flow systems.

Change the shape and size of heat exchange surface

A thin porous metal layer is formed on the surface of metal tube by sintering, EDM or cutting, which can enhance the boiling and condensation heat transfer. Such as: high heat flow tube of USA, E-tube of Japan, T-tube of Germany, DAE of China, etc. In addition, if a porous body is placed on the heating surface in boiling heat exchange liquid, the steam can be continuously removed through the porous heating surface, which is the so-called “suction” method, so as to improve the film boiling heat transfer. In condensation heat transfer, a layer of material with low surface tension, such as polytetrafluoroethylene, can be coated on the heat transfer surface to cause bead condensation, which is conducive to increase the heat transfer coefficient. For boiling heat transfer, according to the physical properties of the heated liquid, the heating surface can be coated with a film of appropriate thickness to make it a non wetting surface, which can significantly improve the boiling heat transfer coefficient. In the utilization of solar energy, a thin layer of selective material is coated on the heat absorbing surface of the collector in order to improve its absorption rate of sunlight and reduce its emissivity, so as to enhance the absorption of radiant heat and reduce the radiation heat loss.