How to improve the strength of bolt connection?

When ordinary nut is adopted, the axial load distributes unevenly among all laps of spinning and closing thread. As shown in figure 1(a), counting from the supporting surface of nut, the load on the first lap will be the largest and on the later laps will decrease.
Theoretical analysis and experiments have proved that the more rotating coil, the more significant the degree of uneven load distribution. After the 8th to 10th coil, the thread almost does not receive load.
Therefore, using a thick nut with many turns cannot improve the connection strength. If using the mounting (pull) nut as shown in Figure 1 (B), the taper mounting section of the nut and the bolt rod are both in tension deformation, which is helpful to reduce the difference of the moment between the nut and the stud rod, so as to make the load distribution relatively uniform. Fig. 1(c) is a ring groove nut, which has similar functions to a suspension nut.

Due to negligence in design, manufacture or installation, the bolt may be subject to additional bending stress (Figure 2), which has a great impact on the fatigue strength of the bolt and should be avoided.
For example, when installing bolts on unprocessed surfaces such as castings and forgings, a convex head or countersunk head seat is often used, and a flat supporting surface can be obtained after cutting (Fig. 3). When the maximum stress of the bolt is fixed, the smaller the stress amplitude is, the higher the fatigue strength is. Under the condition that the working load and residual pre-tightening force remain unchanged, reducing the bolt stiffness or increasing the stiffness of connected parts can achieve the purpose of reducing the stress range (see figure 5), but the pre-tightening force should be increased.

Figure 5
The measures of reducing the rigidity of the bolt are as follows: increase the length of the bolt appropriately; Partly reduce the diameter of the bolt or make the hollow structure as flexible bolt. The installation of elastic elements (Fig. 6) under the nut can also achieve the effect of flexible bolts. The flexible bolt has a large amount of deformation and strong energy absorption effect, and is also suitable for bearing impact and vibration. 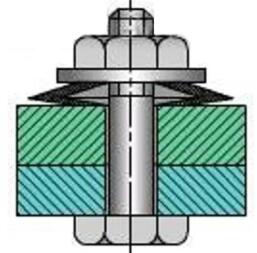 Figure 6
In order to increase the stiffness of the connected system, it is not suitable to use gaskets with small stiffness. The sealing connection shown in figure 7 is preferred with a sealing ring.