On November 5, 2020, at the invitation of Shanghai Institute of rules and regulations of China Classification Society (CCS), I had the honor to participate in the review meeting of the review draft of “additive manufacturing inspection guide”.

During the meeting, we had face-to-face communication with industry experts, and searched the release of relevant technical standards (ASTM, EN, GB and ISO) of additive manufacturing (AM), and had a superficial understanding of additive manufacturing. In terms of the rules of the Classification Society for marine products, CCS will also include the marine products manufactured by additives and related repair technologies into the scope of approval of the society after dnvgl, ABS, BV and LR. Congratulations.

Additive manufacturing is a huge topic. This paper only introduces its development and 3D printing of metal materials.

The general concepts and procedures for 3D printing were first described by Raymond F. Jones in his story the tools of trade, which was published in November 1950 Of Amazing Science Fiction In the magazine. In that article, he called it “molecular jet.”.

In 1971, Johannes f. Gottwald has applied for the patent of liquid metal recorder (us3596285a), which is a device for continuously spraying metal materials. It can construct detachable metal parts on a reusable worktable, which can be put into use immediately or recycled by remelting for re printing.

This appears to be the first 3D printing patent to describe rapid prototyping and controlled on-demand manufacturing patterns. In 1974, David E. h. Jones proposed the concept of 3D printing in Ariadne, a regular column of new scientist.

His research results were published as journal papers in April and November 1981. However, there was no response to his publication. His equipment was not highly rated in the laboratory and his boss showed no interest. His research budget is only 60000 yen (545 US dollars) a year. His patent right to XYZ plotter was finally abandoned and the project was terminated.

On 2 July 1984, American entrepreneur bill Masters“ Computer automatic manufacturing process and system ”A patent (US 4665492) has been applied. The application was filed in the U.S. patent and Trademark Office as the first 3D printing patent in history: This is the first of three patents belonging to masters, which lays the foundation for the 3D printing system used today.

On 16 July 1984, Alain Le Méhauté , Olivier de Witte and Jean Claude Andre We have applied for the patent of stereolithography technology. The application of French inventors was abandoned by the French General Electric Company (now Alcatel alsam) and cilas (laser consortium). The reason for its alleged abandonment is that “Lack of business perspective” .

1984 , Three weeks after the French patent filing, chuck hull of 3D Systems Inc（ Chuck Hull ）He applied for a patent for his own stereolithography manufacturing system, in which the raw materials were stacked by UV laser curing polymer. Hull said the program could “print 3D objects by creating a link between the cross sections of the printed object,” but it was invented by Xiaoyu.

Hull’s contribution is the design of STL (stereolithography) file format, which is widely used in 3D printing software and digital slicing and filling. In 1986, Hull’s system was patented, and his 3D systems company released the first commercial 3D printer, SLA-1 .

Up to now, most of the 3D printers, especially for 3D printers, have been designed to use melt deposition and deposition technology. The technology 1988 from S. Scott Crump Developed and commercialized by his company STRATASYS, which operates in 1992 It launched its first FDM machine.

At that time, all metalworking was done by what is now known as non additive processes (casting, manufacturing, stamping and machining); Although a lot of automation is applied to these technologies (such as robot welding and CNC), in metal processing, the tool or head converts a large amount of raw materials into the desired shape through a three-dimensional work package. This idea is only related to the process of removing metal (rather than adding metal), such as NC milling, CNC EDM, and many other methods.

In 1995, Fraunhofer society has developed a selective laser melting process.

In 2012, Filabot has developed a system for the closed cycle of plastics and allows any 3D printer with FDM or FFF technology to print a wider range of plastics.

The term “3D printing” originally referred to the process of depositing binder material layer by layer on a powder bed with the head of an inkjet printer. Recently, mainstream culture has begun to use the word to represent a wider range of additive manufacturing technologies, such as Selective electron beam melting in additive laser . However, official technical terms and global standards are usually used“ Additive manufacturing ”To describe in order to contain a broader connotation.

The most commonly used 3D printing technology (46% in 2018) is a material extrusion technology called melt deposition modeling (FDM). Although FDM technology was invented after the other two most popular technologies, stereolithography (SLA) and selective laser sintering (SLS), FDM is usually the cheapest of the three technologies, far more than other technologies, which makes FDM more popular.

The rise of metal 3D printing

The first application in Metal 3D printing is Rapid prototyping : this technology has been used in the aerospace industry for many years, and the industrial application in other industries is also growing rapidly.

Next, let’s take a brief look at the most commonly used metals in 3D printing and how these metals meet the requirements of 3D printing.

Due to the relatively high cost of additive manufacturing (AM), high performance equipment is one of the applications that can use am, such as aerospace, defense or energy industries. In recent years, applications such as Titanium, Inconel, aluminum or steel Materials have made a lot of progress.

Titanium based alloys are well known for their high specific strength, stiffness and corrosion resistance, and are widely used in aviation, biomedical and chemical industries. As shown in the table above, the tensile strength of these alloys is very high compared with other high-performance materials, while its density is only 4.4 g / cm3.

High reactivity at high temperature It is one of the challenges in the processing of titanium based alloys. In order to prevent it from reacting with oxygen or nitrogen, the process must be carried out in vacuum or argon atmosphere.

Electron beam melting (EBM) is usually used as the processing method of titanium based alloys due to the use of vacuum treatment chamber. In recent years, the development of selective laser melting (SLM) and directed energy deposition (DED) has also made the 3D printing of titanium possible. At present, leading companies in the field of 3D printing, such as materialize and 3D systems, can provide am services for titanium based alloys. 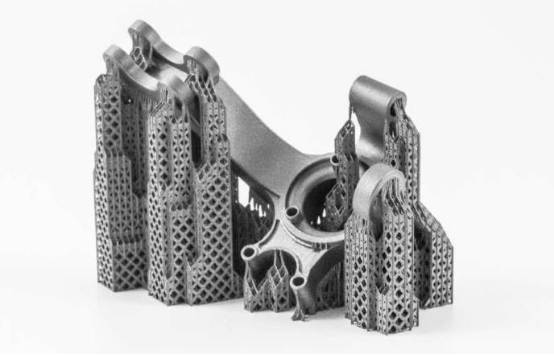 Aluminium and its alloys

Aluminum is due to its Light weight, corrosion resistance and good mechanical properties It is widely used in many industries such as aviation and automobile. Until recently, am applications for aluminum alloys have been limited because they are more suitable for traditional manufacturing technologies with low-cost production, and am has little advantage in cost.

Aluminum and aluminum alloys also face some challenges in 3D printing, including high laser reflectivity of aluminum itself and oxide formation on aluminum surface. Nowadays, 3D printing of aluminum is mostly in small quantities. Engineers are making great efforts to improve technology and reduce costs, and aluminum is expected to become one of the most important materials for 3D printing in the near future.

People are also interested in aluminum alloys, such as AlSi (aluminum silicon alloy) or FeAl (iron aluminum alloy), because of the use of aluminum, they improve mechanical properties and maintain low weight.

You can also 3D print high temperature resistant metals, such as Inconel, which can operate at temperatures up to 1100 ° C. These nickel base superalloys also have high strength and Excellent corrosion resistance It is very suitable for aerospace industry and energy industry. In addition, due to the relative ease of processing various parts including SLD.

The nickel base superalloy of AM can be used in gas turbine blades which need high strength, high temperature resistance and complex geometry.

Steel is The cheapest One of the 3D printing materials, which has High strength, good working temperature range And because of It has good ductility and is easy to process . In fact, almost all metal 3D printing technologies (such as SLM, ded and binder jetting) can be used for steel processing.

You can even do 3D printing of steel at home. Colorfabb offers a special thin steel wire that you can use for 3D printing at home using extrusion additive manufacturing methods.

We can divide the steel related to 3D printing into two categories: tool steel and stainless steel. Most of the leading companies in the AM industry offer the possibility of producing steel parts. For example, formetrix (formerly nanosteel’s additive manufacturing business) can provide services for 3D printing tool steel, which can be used to make tools, dies, bearings and gears. 316L stainless steel is one of the most commonly used 3D printing. Its typical application is to manufacture compressor impeller of turbocharger, which can be realized by SLM or ded technology. Copper and its alloys

Copper is a kind of material with high thermal conductivity and high conductivity, which has broad application prospects.

But 3D printing faces many challenges. Copper is a highly reflective material, which means that most of the laser beam energy used for 3D printing of other metals (such as steel or titanium) is mostly reflected by copper.

To solve this problem, the Fraunhofer ILT researchers chose to use a green laser and use this technology to produce high-density sample parts. In the near future, this technology is also expected to produce objects with complex geometry, which brings a lot of opportunities for engineers.

Currently, copper based alloys such as bronze and brass can be 3D printed. Bronze and brass are widely used in marine applications due to their salt and seawater corrosion resistance. Recently, bronze samples were made using SLM and wire arc am. In addition, both studies reported superior mechanical properties of 3D printed products compared to conventional cast samples.

Precious metal am is used in jewelry, aerospace and electronics industries; however, precious metal material processing technology for high-performance parts is still under development and is currently only available in the jewelry industry. Most companies using powder bed fusion technology can use precious metals (such as silver, gold or platinum) for 3D printing.

For example, EOS, in cooperation with Cookson precise metals (CPM), has demonstrated the use of am in the production of gold products, which not only provides jewelry designers with more freedom, but also proves that powder bed melting technology has great imagination space in manufacturing jewelry with less materials and lower cost.

Other companies, such as materialize, offer the possibility of producing precious metal items with a 3D printing technology called lost wax printing & casting. This method includes the use of stereolithography technology to produce 3D printing wax mold; next, the gypsum mold is created by using wax mold, and the final object is made in the plaster mold by conventional casting process. Through the use of this technology, gold, silver, bronze, brass and copper products can be made, including jewelry, fine micro sculpture and sculpture.

3D printing technology can not be ignored Own advantages Industry experts believe that:

And 3D printing technology limitations It is mainly reflected in the following aspects:

Metal 3D printing has provided a variety of applications in many industries, and more importantly, the number of such applications is still growing. In addition, a large number of competitive companies offering 3D printing products and services are increasing their printable material catalog to find new customers and expand into new areas.

In the next few years, we can expect the 3D printing industry to maintain the same growth path. Metal 3D printing will eventually become the subversive technology we expect.