What is a bolt

What is a bolt?

Bolt: mechanical parts, cylindrical threaded fasteners with nuts. A kind of fastener composed of head and screw (cylinder with external thread), which is used to connect two parts with through hole. This kind of connection is called bolt connection. The bolt can be separated from the connecting part by screwing down. According to the stress mode of connection: common and reamed. According to the head shape: hexagonal head, round head, square head, countersunk head and so on. The hexagonal head is the most commonly used. Generally, countersunk head is used where connection is required.
The English name of riding bolt is U-bolt. It is a non-standard part, and its shape is U-shaped, so it is also called U-bolt. There are threads at both ends, which can be combined with nuts. It is mainly used to fix tubular objects, such as water pipes or flakes, such as leaf springs of cars. Because its way of fixing objects is like riding on a horse, it is called riding bolt. According to the thread length, it can be divided into full thread and non full thread.
According to the thread profile, it can be divided into coarse thread and fine thread. The coarse thread profile is not shown in the mark of bolt. According to the performance grade, bolts are divided into 8 grades: 3.6, 4.8, 5.6, 6.8, 8.8, 9.8, 10.9 and 12.9. Among them, bolts above grade 8.8 (including grade 8.8) are made of low carbon alloy steel or medium carbon steel and heat treated (quenching + tempering), which are generally called high strength bolts, while bolts below grade 8.8 (excluding grade 8.8) are generally called ordinary bolts.
According to the manufacturing accuracy, ordinary bolts can be divided into three grades A, B and C. grade A and B are refined bolts, and grade C is rough bolts. For connecting bolts used in steel structure, unless otherwise specified, they are generally common rough C-grade bolts. There are differences in the processing methods of different levels, and the corresponding processing methods are usually as follows:

There are many names for bolts. Everyone may call them different. Some people call them screws, some people call them bolts and some people call them fasteners. Although there are so many names, but the meaning is the same, are bolts. Bolt is a common term for fastener. Bolt is a tool that uses the physical and mathematical principles of oblique circular rotation and friction force of objects to fasten the mechanical parts step by step.
Bolts are indispensable in daily life and industrial production. Bolts are also known as industrial rice. It can be seen that bolts are widely used. The application scope of bolts are: electronic products, mechanical products, digital products, electrical equipment, mechanical and electrical products. Bolts are also used in ships, vehicles, hydraulic engineering, and even chemical experiments. Anyway, bolts are used in many places. Such as precision bolts used in digital products. DVD, cameras, glasses, clocks, electronics and other micro bolts; television, electrical products, musical instruments, furniture and other general bolts; as for engineering, construction, bridges use large bolts, nuts; transportation equipment, aircraft, trams, cars and other large and small bolts. Bolts have important tasks in industry. As long as there is industry on the earth, the function of bolts will always be important.

Generally, the countersunk head is used in the place where the surface after connection is required to be smooth without protrusion, because the countersunk head can be screwed into the parts. The round head can also be screwed into the part. The tightening force of square head can be larger, but the size is large. In addition, in order to meet the needs of locking after installation, there are holes in the head and in the rod, which can prevent the bolts from loosening when they are subject to vibration. Some bolts have no thread of light rod to do thin, called thin waist bolt. This kind of bolt is beneficial to the connection under variable force. There are special high-strength bolts on the steel structure, the head will be larger, and the size will also change. In addition, there are special uses: T-shaped slot bolt, most of which are used in machine tool fixture, with special shape, and both sides of the head should be cut off. Anchor bolts are used to connect the machine and the ground. There are many shapes. U-bolt, as previously mentioned. wait. There are also special studs for welding, one with thread and the other without thread, which can be welded on the parts, and the other side can directly screw the nut.

Common and reamed. Ordinary bearing mainly axial force, can also bear the requirements of the lateral force is not high. The bolt used for reaming should match the size of the hole and be used when subjected to transverse force.

Bolt detection is divided into manual and machine. Manual is the most primitive and the most common way of consistent detection. In order to reduce the outflow of defective products as much as possible, the general production enterprise personnel visually inspect the packaged or delivered products to eliminate the defective products (including tooth injury, mixing, rust, etc.).
Another way is automatic machine testing, mainly magnetic particle testing. Magnetic particle inspection is based on the interaction of magnetic flux leakage field and magnetic powder at the defect of bolt. In view of the difference between the permeability of the defect (such as crack, slag inclusion, mixture, etc.) and the permeability of steel, the magnetic field at the discontinuity of these materials will change after magnetization, forming part of the magnetic flux leakage field on the workpiece surface, thus attracting the magnetic powder to form the magnetic powder pile at the defect Under proper illumination conditions, the position and shape of the defects can be seen. By observing and explaining the accumulation of these magnetic particles, the purpose of eliminating defective products has been achieved.

How to make high quality bolt?

To make a bolt, we need to design a bolt first. In addition, the bolt performance grade, thread tolerance grade, dimensional accuracy grade, surface treatment method are all factors to be considered in the design, and even the sequence of some processes also need to be defined in the design (such as thread rolling and quenching and tempering, the reverse sequence has a certain impact on the fatigue strength of the thread).

In order to make the bolt meet the application needs, the material should be selected.

The design material is ready and the process sequence is very important.

Cold heading process is the preferred process for fastener head forming. Cold heading process has the characteristics of high productivity, high material utilization, high surface quality and internal quality. When the steel bar is cut to the required length, it can be heading. The heading can be cold forming or hot forming. Generally, the smaller bolts are formed by cold upsetting, and the larger bolts are formed by hot upsetting. Heat treatment is one of the important processes in the manufacture of high-strength bolts. Its purpose is to improve the comprehensive mechanical properties of fasteners. Heat treatment process has a very important impact on the internal quality of fasteners, especially high-strength bolts.
With the development of the times, the protective continuous heat treatment production line has occupied a dominant position since 1990s. The device not only has excellent sealing performance, but also can accurately control the temperature and process parameters by computer, and has the function of equipment fault alarm and display. In the whole process of quenching and tempering heat treatment, some oxidation gas will be produced outside the furnace. Through a series of chemical changes and corrosion on the surface of high strength bolt, the material of high strength bolt will decarbonize itself. According to technicians, decarburization of medium carbon alloy steel is more serious than that of carbon steel, and the fastest decarburization temperature is between 700 ℃ and 800 ℃.
Decarburization is one of the failure factors that need to be prevented in the thermal care stage of bolts. Decarburization will cause local strength reduction, and micro cracks are easy to occur in the stress of bolts, and then develop into fatigue failure.
Carburization on the surface of the thread will increase the strength and decrease the plasticity, resulting in delayed crack or fracture. Before rolling the thread, the part of the thread to be rolled should be turned to the pitch diameter of the thread.
The thread is formed by the pressure of the screw plate (rolling die). The thread formed by rolling process has the advantage that the plastic metal fiber streamline of the thread part is not cut off, so the bolt strength is increased, the precision is high, and the quality is uniform, so the rolling process is widely used.
In order to make the thread outer diameter of the final product, the required thread blank diameter is different, because it is limited by the thread precision, whether the material has coating and other factors. For example, if the thread needs to be hot-dip galvanized surface treatment in the future, the influence of surface treatment on the final size of the thread should be considered in the thread processing, and the rolling thread needs to be advanced.
Rolling (rolling) and pressing thread is a kind of processing method which uses plastic deformation to form thread. It uses a rolling die with the same pitch and profile as the thread to be processed to extrude the cylindrical screw blank and make the screw blank rotate at the same time. Finally, the profile on the rolling die is transferred to the screw blank to form the thread.
The common point of thread rolling (rolling) and pressing is that the number of rolling revolutions does not have to be too much. If it is too much, the efficiency is low, and the thread surface is easy to produce separation phenomenon or random thread phenomenon. On the contrary, if the number of turns is too small, the thread diameter is easy to be out of round, and the initial rolling pressure is abnormally increased, resulting in shortened die life.
Common defects of rolling thread: surface crack or scratch of thread part; disorderly thread; out of roundness of thread part. If a large number of these defects occur, they will be found in the processing stage. If the number of defects is small and the production process does not pay attention to these defects, they will flow to users and cause trouble. Therefore, we should sum up the key problems of processing conditions and control these key factors in the production process. 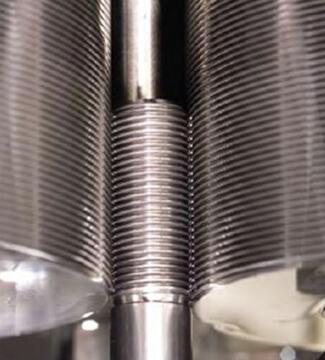 In addition, there are 18 kinds of coating, 19 kinds of phosphating and 20 kinds of oxidation on the surface of screws.

Therefore, only when the design, material selection, heat treatment, rolling thread, surface treatment, lubrication and other important processes are well done, can the bolts with good quality be made.