What is a double-headed stud

What is a double-headed bolt?

Bolt refers to the larger diameter of the screw, can also have no head, such as bolt. It is also called double head screw or double head stud. The most common form of double head bolt is threaded at both ends and polished rod in the middle.
The most typical use: anchor bolts, or similar anchor bolts, thick connection, when ordinary bolts can not achieve. 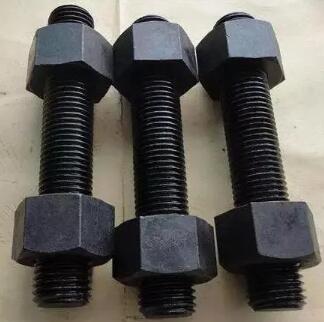 The diameter, length and quantity of the double-headed bolt shall meet the requirements of the specification. The type and material of the bolt shall be determined by the grade. There are two kinds of commonly used double-headed bolts (also known as full thread bolt). There are two kinds of threads: coarse thread and fine thread. Coarse thread is represented by M and nominal diameter, while fine thread is represented by M and nominal diameter × Pitch representation. According to the fastener standard, M36 bolts can use coarse thread, and M36 and above diameters can use fine thread, with pitch of 3. BM = 1D double head bolt is generally used to connect two steel connected parts; BM = 1.25d and BM = 1.5D double head bolts are generally used for the connection between cast iron and steel connected parts; BM = 2D bolt is generally used for the connection between aluminum alloy connected parts and steel connected parts. The former connecting piece is provided with an internal thread hole, and the latter connecting piece is provided with a through hole. The threads on both ends of equal length double head bolt shall be matched with nuts and washers, which are used for two connected parts with through holes. One end of the welding bolt is welded on the surface of the connected part, and the other end (threaded end) passes through the connected part with a through hole, then the washer is put on, and the nut is screwed on, so that the two connected parts are connected as a whole.

Presentation format:
Thread specification d = M12, nominal length L = 80mm, performance grade 4.8, full mark of equal length double head bolt: GB 901 M12 × 80
Product examples:
Double head bolt generally needs surface treatment. There are many kinds of surface treatment, such as electroplating, blackening, oxidation, phosphating, non electrolytic zinc coating and so on. However, electroplating fasteners occupy a large proportion in the actual use of fasteners. Especially in the automobile, tractor, household appliances, instrumentation, aerospace, communications and other industries and fields. However, for threaded fasteners, not only a certain anti-corrosion ability is required in use, but also the interchangeability of threads must be ensured, which can also be called screw in here. In order to meet the requirements of “anti-corrosion” and “interchangeability” of threaded fasteners, it is necessary to establish a special electroplating standard.

Main use of double head bolt

The production of double-headed bolts requires fixed equipment and machine tool processing. Of course, the processing procedure is relatively simple. It mainly includes the following procedures: first of all, the material needs to be drawn. The material drawing is to use the material drawing machine to straighten the distorted material. After this procedure, the next procedure can be carried out, The next process is to use the cutting machine to cut the straightened long material into the required length according to the customer’s requirements, which completes the second process. The third process is to put the cut short material on the wire rolling machine and roll out the thread; Here, the ordinary bolt is finished. Of course, if other requirements are needed, other processes are needed.
Generally known bolt refers to the larger diameter of the screw, according to this statement, the screw relative to the bolt, the diameter is much smaller. Stud bolts have no head, some are called double-headed bolts. The two ends of the double-headed bolt are threaded, the middle does not contain thread, and the middle is bare rod.
Stud bolts are used in large equipment, such as reducer frame. In practical use, the external load will have vibration, coupled with the influence of temperature, the friction will become smaller, and over time, the threaded connection will relax and fail. So we need to do a good job in the maintenance of the double-headed bolt at ordinary times.
The double head bolt or anchor bolt will have problems under the action of long-term mechanical friction. When there are problems, the engine oil pan should be removed. Carefully check the use of the engine bearing bush, and check whether the clearance between the bearing bush is too large. If the clearance is too large, it should be replaced in time.
Replace the connecting rod bolts when replacing the double-headed bolts. Some large-scale equipment, such as nail making machine, in normal operation, if it is found that the engine operation is not very stable or there is abnormal noise, it is also necessary to stop and check in time to avoid bigger problems.
In every maintenance, the newly replaced bolt and other parts should be inspected. The inspection should focus on the head and guide part of the bolt, and strictly check whether each part of the thread has cracks or dents, as well as whether the tooth shape of the bolt has changed.
Check whether the screw pitch is abnormal. If it is abnormal, it can not be used any more. Torque wrench should be used when installing connecting rod cap. Must be in accordance with the provisions of the standard tightening, torque can not be too large or too small, but also pay attention to the selection of matching manufacturers of bolt and bolt.